skip to main | skip to sidebar


At our old house, there was a Japanese Maple which draped over our front entry. I had a love-hate relationship with that tree. Mainly love, but just a little hate every October.
After it's final blaze of autumnal glory, it would drop its leaves on the front walk, and they would be tracked in by kids and dogs at a rate which outpaced the ability of any broom or rake to keep in check. Leaves in the front hall, leaves on the stairs, leaves working their way into the kitchen. It was mostly worth the annoyance though. It was a beautiful tree, arching perfectly over the front walk, right at the edge of the front porch. It shaded the west facing front door in summer, it provided glorious color in the fall, a perfect arc for hanging lights at Christmas, a frame for photos of little ones getting ready to trick or treat, or high school graduates in their new suits, a place where oldest and youngest sons would stretch out on their backs and look up at the leaves together.
And it was a perfect access point to the garage roof for #2 son's climbing exploits. Sometimes for virtuous errands, like voluntary trips up to clean the gutters or to rescue a frisbee. Sometimes more questionable ones, like the day he climbed up there during a snow/ice storm (for a better vantage point in a snowball fight), then, at his older brother's prompting slid down from the peak of the roof. And spent the next couple of weeks on crutches.* There was a horizontal branch with the perfect balance of stiffness and spring that even I could not resist swinging on it occasionally.
A lot of life happened on and around that tree. 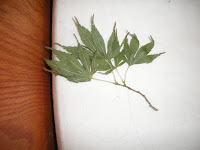 When we were unpacking, I was moving the beautiful oak cradle my dad had made for us prior
to the birth of our oldest. resting in the cradle was a small cluster of leaves from that tree. Still green - they had dropped a bit early, as the movers hauled the cradle out. Perhaps a parting gift from the tree, since the kids couldn't track it's leaves into the new house, it sent a few along to say "goodbye" once more.
*proper sized crutches were luckily available because older brother had needed them a year or so earlier after the vine he was swinging on broke. But that's another story.
Posted by Janet at 8:45 PM

Janet
If I could be any animal, I'd be a sea otter (despite the fact that I despise shellfish) because they look like they have so much fun! I have four novels in various states of completion stacked by my desk, and six children, also in various stages of completion, who fill my house and my calendar in ways which stagger the imagination. I love cold weather, friendly dogs, good books and strong coffee.